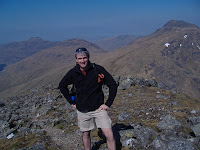 Recently, I added a new story to the SARstories website, including not only a firsthand account by the man who was rescued but also mission reviews by some of the Search & Rescue volunteers who saved his life.

In November, 2006, Michael Tunney and his 16 year-old son were climbing Scotland's Beinn a’Cheachain, when a great day turned into a near-fatal experience. Michael slipped on a patch of ice and fell 200 feet, breaking his neck, right hip and arm, seven ribs and punctured a lung. Luckily, he'd put on some extra, insulating layers before the accident which helped protect him from the bitter cold during the hours he lay waiting for help, wedged against the rocks. The rest of his gear had been lost in the fall.

Fortunately for both Michael and his son, who'd scrambled, slid and fell down the mountainside to help his father, also sustaining injuries in the process, they had two cell phones on two different networks and both were able to obtain signals. As always, they'd kept their phones in their pockets rather than their packs. Calls were made to "999" for help. 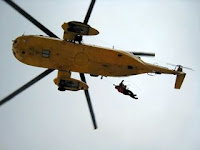 After what seemed an eternity, the Arrochar and Oban Mountain Rescue teams came to the aid of the injured climbers. They were flown to the Southern General Hospital in Glasgow, where Michael was critical throughout the night.

Michael Tunney is now undertaking a fundraising effort to benefit both rescue teams as well as the Northern Police Treatment Centre, where he received physiotherapy after being released from the hospital.

For this fundraising campaign, the challenge that Michael has set for himself is to complete the nine Scottish 4,000-foot peaks and 14 "Munros" along the way, with a total elevation gain of just under 30,000 feet. You can find out more about this challenge at http://mtunney.wordpress.com.

"It has been almost two years since I so nearly paid the ultimate price for my passion for the mountains and the outdoors in general. While I was very lucky to survive a fall that on another day would have proved fatal, it is still very difficult to comprehend how I did manage to survive. What I do know is that, not only am I fortunate to be alive, but that I am extremely fortunate to be physically able to type this at all." Read more....

Thanks for the entry Debs... although my recovery went fairly smoothly to be fully fit now is an amazing feeling!! While it's true that self-determination played a big part, it has been the actions of others that have allowed me to progress this far. I'll never forget what everyone did for me and this challenge is someway to repaying some of those involved.... Thanks again..Michael