The New Mexico Search and Rescue Council, a non-profit, all-volunteer organization that represents the largest group of wilderness search and rescue teams in the state, will be hosting the 2011 "Escape" in Ruido, NM, on May 13 - 15th at the Ruido Convention Center.

Courses offered at this year's conference will include:

To see the complete schedule and find out more about the conference, lodging and the keynote speaker, see http://www.escapeinfo.org/.
Posted by Deb Kingsbury at 9:52 PM No comments:

According to a National Park news release, the two hikers that were listed as missing in Zion National park have been found.  Evgenia Buzulukova, 25 from Roy, Utah and Jonathon Wilson, 28 from Portland, Oregon, were located in the Left Fork of North Creek (The Subway) last night, April 19, at approximately 10 p.m. in safe and stable condition.

The news release goes on to say...

"They eventually reached a point in The Subway where the very high and cold water conditions were such that they did not think it was safe to continue.  They decided to wait at this spot for help from other hikers who may be in The Subway.

On Tuesday, April 19, they encountered another group of hikers who were able to assist the couple through the difficult area.  The couple then joined the group for the rest of the route through the canyon.  They were eventually located that same evening at approximately 10 p.m. by a rescue helicopter from the 66th Rescue Squadron from Nellis Air Force Base in Las Vegas, NV.  Two squadron members were lowered down to the group and assisted them on the rest of the hike out.  They all arrived safely at the Left Fork of North Creek Trailhead at approximately 11 p.m.  Park rangers met the couple at the trailhead and determined that they did not require any medical attention.  After interviewing them, they were released. .... The successful conclusion to the search was in part because the hikers had obtained a backcountry hiking permit which included information useful to the searchers.  They also made a wise decision to wait for help in the canyon instead of attempting a difficult and dangerous obstacle that would have pushed the limits of their capabilities and equipment."
Posted by Deb Kingsbury at 2:47 PM No comments: 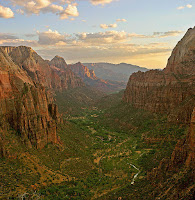 Zion National Park rangers, park employees and volunteers are currently conducting a search for two missing hikers, 25 year-old Evgenia Bruzulukova from Roy, Utah and Jonathon Wilson, 28, from
Portland, Oregon. The pair had a backcountry permit for a one-day trip through Russell Gulch and the Left Fork of North Creek (known as "The Subway") on Saturday, April 16.

Bruzulukova and Wilson were last seen by park visitors on Saturday morning at the head of Russell Gulch. Rangers began searching for them on Sunday, after the couple’s vehicle was discovered at the Left Fork of North Creek Trailhead. The trip that they had undertaken involves several 100-foot rappels and swimming through the Left Fork of North Creek. Streams in the area are currently running very high and cold due to runoff from snowmelt.

Anyone with information concerning the missing hikers or who thinks they may have seen them are being asked contact Zion National Park Dispatch at 435-772-0178.  You can read one of many news articles about this search and see photos of the missing hikers at http://www.lasvegassun.com/news/2011/apr/19/crews-search-2-missing-hikers-zion-national-park/.

********
Of course, this is just one of many ongoing Search & Rescue missions throughout the world. You can see a feed of SAR news headlines on the Backcountry Rescuer website.
Photo credit: Wikimedia Commons
Posted by Deb Kingsbury at 3:55 PM No comments:

An AirMed Skycare helicopter crashes into the ocean off the coast of Maine with a burn patient, nurse, paramedic and pilot aboard. Coast Guard rescue vessels had to turn back before reaching the search area, due to all hands being ill from rough seas. Then, members of the Cape Elizabeth Water Extrication Team (WET) were called out.

Author Bruce Hansen was one of the WET team members who fought exhaustion and hypothermia that night to rescue the surviving victim of the crash. He writes, "We were out there and insanely focused.  At 0130 hours, the Coast Guard Duty Commander radioed to our handheld, duct-taped to the helm. The WET Team had completed its assigned search pattern and was advised to stand down.  After all this? The Coast Guard classified the crash victims as missing and presumed dead. We did not think they had to be dead men."

Read the full story on Bruce Hansen's blog, A Voice Cries Out in the Wilderness.

Rescue on Rosalie Peak by Maverick

Maverick (a.k.a Prakesh), Alyson, Kevin and a black lab named J.B. started up Colorado's Rosalie Peak on the morning of February 11, 2011, under blue skies. Just before they reached the summit five hours later, the forecasted snowstorm and high winds moved in. And, on the way down, Alyson fell, breaking her leg and pelvis and, as was later discovered, suffering from internal bleeding.

Fortunately, there was cell phone service on the mountain, and a call for help was made. UNfortunately, the rescue helicopter that was initially dispatched and landed at the victim's location had to suddenly take off without her, due to the storm. Long, cold hours would pass before a ground unit from the Alpine Rescue Team could reach Alyson and her friends, and then would come the "descent from hell," as Maverick puts it.

He writes, "I stood and watched the chopper take off in abject dismay. I had had barely enough time to digest the fact that they were leaving her. I admit I was afraid to turn and look at Alyson’s face as the chopper took off… for two reasons: (1) I was plain chicken to witness her disappointment which I knew was far greater than mine and (2) I did not want her to see in my face that I lost hope for a quick second; it would have killed the overall mood I was hoping to create during this day… a positive mindset was the biggest weapon we had at this point since we could be in for a long wait."

Read the full story on SummitPost.org.

Posted by Deb Kingsbury at 5:36 AM No comments:

A SAR Volunteer Loses His Life During a Search

This morning, I found out that Arizona Mounted Search & Rescue volunteer, Lloyed Reese, 77, died during a mission this past Tuesday. Lloyd was a member of the Gila County Sheriff's Office Mounted Posse, which was formed in 1967.

Woolsey was leading his horse across an old dam in a remote location when he slipped and fell approximately 20 feet onto the rocks below. He was pronounced dead at the scene.

Frank Woolsey was participating in the search for a 56-year-old man who left his home near Payson, Arizona, on an ATV sometime around 10 a.m. on April 1st. The following afternoon, a neighbor contacted the sheriff’s office, stating that he'd not heard from the man since, and he didn't appear to be prepared for an extended trip.

For more information on Lloyd Reese's death and the mission he was on, see: Volunteer Dies During Search and Rescue Tuesday
Posted by Deb Kingsbury at 8:44 AM No comments: