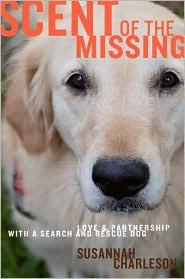 Scent of the Missing: Love and Partnership with a Search-and-Rescue Dog

In the aftermath of the Oklahoma City bombing, Susannah Charleson clipped a photo from the newspaper: an exhausted K9 handler, face buried in the fur of his search-and-rescue dog. A dog-lover and pilot with SAR experience herself, Susannah was so moved by the image she decided to volunteer with a local canine team and soon discovered firsthand the long hours, nonexistent pay, and often heart-wrenching results they face.

Still she felt the call, and once she qualified to train a dog of her own, Susannah adopted Puzzle, a strong, bright Golden Retriever puppy who exhibited unique aptitude as a working dog but who was less interested in the role of compliant house pet. Puzzle's willfulness and high drive, both assets in the field, challenged even Susannah, who had raised dogs for years.

Scent of the Missing

is the story of Susannah and Puzzle's adventures together and the close relationship they forge as they search for the lost--a teen gone missing, an Alzheimer's patient wandering in the cold, signs of the crew amid the debris of the space shuttle Columbia disaster. From the earliest air-scent lessons to her final mastery of whole-body dialog, Puzzle emerges as a fully collaborative partner in a noble enterprise that unfolds across the forests, plains, and cityscapes of the Southwest. Along the way, Susannah and Puzzle learn to read the clues in the field and in each other, to accomplish together the critical work neither could do alone and to unravel the mystery of the human/canine bond.

Susannah Charleson is a member of MARK-9, a canine search and rescue team based in Dallas, Texas. Flying SAR and crime scene photography for local law enforcement led Susannah, a flight instructor and commercial pilot, to join the team.

Check out this video of about "Scent of the Missing".....

by Steve Achelis, who, as a member of Salt Lake County Search and Rescue Team, participated in hundreds of rescues that frequently made the evening news.

In a review in the July, 2010, issue of Mountain Rescue Magazine, SAR volunteer and ski patroler Julie Harrell writes, "Steve recreates each story starting with a pager message which is generally not a correct relay of information. Two missing hikers could morph into three Korean climbers who fell down a snow covered slide and are stuck in a snow cave, hoping for rescue while a blizzard rages outside. We follow him as he trudges through dangerous avalanche country, treats many fallen victims, uncovers seemingly innocuous injuries only to discover that they are life-threatening, and teaches us how to be better rescuers through his assumptions, successes and near mistakes. He collaborates, leads, follows, honors and shares everything with his rescue team, giving each of them a lot of personal credit throughout the book." 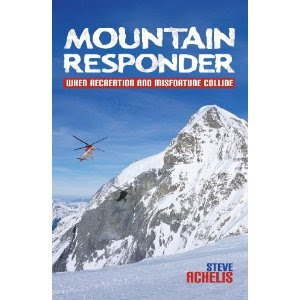 is available on Amazon.
Posted by Deb Kingsbury at 11:50 AM No comments:

So Many Skills, So Little Time (To Get Rusty)

Now that I'm home in Arizona after three months in Nepal and getting back to SAR, I realize how rusty I am at a number of skills after not using them while I was away. I'm sure as I practice and review, what I feel like I've forgotten will come back fairly quickly. But on one recent mission, I found myself hesitating and really having to think about what I was doing when it came to certain skills that had been--or at least were becoming--more second nature before I left. It just goes to show that SAR work involves a lot of ongoing training and practice, and we can't take those skills for granted if we don't use them for a while.

So I was thinking about all the learning I've done since getting involved with SAR three years ago:

There have been important details like learning to attach the wheel to the litter, how to properly secure the ATVs to the trailer, how to estimate probability of detection. And the list goes on. Heck, I think I've learned more in three years of SAR than I did in five years of college. At least, more practical, hands-on skills.

So what's the point of this post? Oh, just sharing my thoughts as I get back up to speed after a few months away and then continue to learn and practice. And I would say to any new or perspective SAR member, search and rescue skills aren't something you learn once and then use now and again when you go on a mission. You really need to put the time in to practice, both on your own and as a team, on an ongoing basis, even if there are no missions for a while. Otherwise, you could find yourself on a real mission not remembering how to perform some important skills and therefore becoming more of a hindrance than a help.

Our team requires each member to participate in certain General SAR skills trainings (ie. GPS, map and compass, ATV operation, truck and trailer training, etc.) once every three years, but that's assuming we're practicing on our own and during missions in between. As far as our technical rescue team goes, we have to pass a basic skills test each year. What about your team (if you're on one)?
Posted by Deb Kingsbury at 9:14 PM 1 comment: