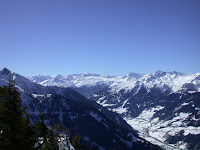 I first became aware of this Search and Rescue team when I corresponded with their founder and Managing Director on LinkedIn and decided to learn more about them.

SAR Dogs Nepal (formerly known as the Himalaya Rescue Dog Squad), established in October, 1989, by Dutchman Ingo Schnabel, is the only organization of its kind in the country, providing Search & Rescue teams and medical aid in the event of natural disasters and when trekkers are reported missing or injured. The squad is able to provide air rescue and tracker dogs to almost any area of Nepal. Members are experienced in a wide range of disciplines, including rock rescue, firefighting, logistics, and wilderness medicine.

The team has a newly formed Junior Rescue Squad,  thanks in large part to American dog trainer Lynn Martin from Oregon's Dog Obedience Academy, who traveled to Nepal with her sister, Kathleen Reick, to help SAR Dogs Nepal train six newly recruited Nepalese youngsters.  This follows a hiatus during The People's War in Nepal from 1996 until 2006, when SAR Dogs Nepal could not continue its training of new disaster relief workers. At present, only 18 staff members and 9 Nepalese volunteers remain, while the team's goal is to have a minimum of 100 disaster relief workers on standby in their mobile  Disaster Relief & Medical Aid Unit.

The team's main headquarters, including a dog breeding and training center, is in Shyauli Bazaar, Lamjung District, in the center of Nepal. They often work at an altitude of  5600 meters (18,373 feet) or more, in diverse and often harsh conditions--from jungle gorges to flooded plains, avalanche zones, and even large-scale traffic accidents.

Flash flooding is common in Nepal, when the monsoons bring heavy rain and heat, melting snow and ice to the rivers. There's also a lot of seismic activity, making landslides, earth tremors, and even full-scale earthquakes constant threats.

Due to a lack of national infrastructure and government support in the field, SAR Dogs Nepal has provided the only medical disaster relief to poor villages in remote areas.

You can learn more about the SAR Dogs Nepal and about the country on the team's website at SARDogsNepal.asia
Posted by Deb Kingsbury at 3:32 PM No comments:

I used to think you had to be eighteen in order to participate in Search and Rescue. But now I know that assumption was wrong. In fact, there are whole teams made up of youth volunteers.

Take Long Beach Search & Rescue, for example. From their website:

Long Beach Search & Rescue "provides young adults with an opportunity to serve the public during emergency situations while encouraging them to explore career possibilities in the law enforcement, fire protection and emergency medical services fields. Long Beach Search & Rescue is an award-winning Learning for Life Explorer Post co-sponsored by the Long Beach Police Motor Patrol and Long Beach Firefighter's Associations." All applicants must be between the ages of 15 and 18 and maintain at least a "C" grade point average in school, among other requirements.

There's also Explorer Post 2002, a youth Search and Rescue team sponsored by the Sonoma County, California, Sheriff's Department. After finding this team, I then did a search for Explorer Search And Rescue (ESAR) and found youth SAR teams all over the country, including but not limited to Arkansas ESAR, Washington ESAR, and King County ESAR, the first youth-based search and rescue team in the nation, established in 1954.

Some states, such as New York for one, don't accept SAR applicants who are under 18 years of age. However, organizations such as Boy Scouts of America and Civil Air Patrol do have units around the country that have Search and Rescue training tracks that minors can get involved with. Explorer Search and Rescue (ESAR) teams are made up of teens--boys and girls--in the Learning for Life program, a subsidiary of the Boy Scouts of America, who are trained and deployed for search and rescue missions.  Read a brief article about ESAR on Wikipedia.

To the Rescue! A young search-and-rescue-volunteer comes to the aid of lost or injured hikers in northern California: Now 18, Tamsen Bell started with Marin Search & Rescue when she was 14 years old, the youngest age at which one can join. When Bell was 16 years old, she took a lead role in a SAR mission involving a 60-year-old hiker who fell 50 feet off a cliff and landed on a mountain ledge, breaking part of her neck and suffering other injuries. Bell then slid down a steep part of the mountain to get to where the injured woman lay. She then examined the victim to find out what kinds of injuries she had suffered and decided the best way to transport her to safety.