In The News: $500 Rides For Lazy Pike's Peak Hikers 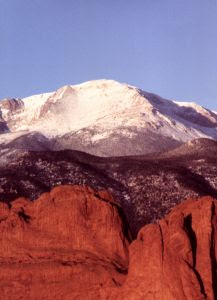 I can't relate. People actually hike to the top of a mountain, then call 9-1-1 because they're too tuckered--or too lazy--to hike back down? Apparently, they do.

Located near the city of Colorado Springs, Pike's Peak is the second most visited mountain in the world next to Japan's Mt. Fuji, so says the article in the Denver Post, entitled, "$500 Rides for Lazy Pike's Peak Hikers Pondered." The summit, at 14,115 feet, can be accessed either on foot on 12.6-mile Barr Trail with a 7,500-foot elevation gain or by vehicle on the 19-mile toll road operated by the city. More than half a million people visit the summit by one means or another each year.

And some of those who walk aren't up for the return trip. El Paso County's all-volunteer Search & Rescue team has had its fill of running two-and-a-half hour "taxi missions" to retrieve these pooped hikers and have stopped doing so, so Pike's Peak Highway officials are now considering a plan to charge uninjured callers for the service. According to the proposal, hikers who request a ride before highway rangers have gone home would be charged $100, while the fee would rise to $500 after hours and even higher if plowing is necessary.

A sign warning of the fees would be placed halfway up the Barr Trail.

The Denver Post article generated quite a few comments, with the vast majority of respondents (if not all?) in favor of the new fines.

One hiker was already fined $500 last December, when he arrived at the summit after dark and broke into the restaurant and gift shop to avoid freezing. (He was also charged for the broken window.)

So what do you think about this? Do you think the fine (and trail sign) will deter people from calling and, thefore, put them at risk? Or do you think it's the way to go?
Posted by Deb Kingsbury at 3:29 PM 1 comment:

At the start of a recent search, our SAR Coordinator handed each of us at the staging area a piece of paper, and on that paper was written the following:

I stared at him blankly, knowing only that ROW stands for "Rest of the World," and then he explained:

The numbers one through ten corresponded with the ten numbered segments he'd drawn on the map laid out on the hood of his vehicle. First, with each of us working independently without discussing the values, we'd give a percentage to the ROW. In other words, what's the probability the missing subject is not in the search area--segments 1-10--at all? And, regardless of what some of us believed, we could not assign the ROW a probability of 100%. We had to leave some room for the search area. So I estimated generously low and wrote 70% on my paper.

Next, we'd assign each numbered segment a lettered value, A through I, as follows:

I looked from the map to my paper and back time and time again and kept changing my mind, second-guessing my assumptions. I kept having to remind myself that the presumption was supposed to be a "despondent subject" as opposed to, let's say, "stranded subject trying to get home."

After I and the rest of the group of searchers, deputies and detectives filled out our papers, we handed them to the Coordinator, who then turned to his laptop and started punching in numbers as he went through each page.

I had no idea at the time that what he was doing was using what's called the "Mattson Consensus," with an experimental lettering method developed by Dan O'Connor, a former contract helicopter pilot for flight operations at Grand Canyon National Park.

Typically, the Mattson Consensus employs the use of percentages for each search segment. In the end, the sum of each "expert's" percentages, including that of the ROW and all designated search segments, must total 100%, with no segment being assigned 0%. (A zero would mean that the expert knew for a fact that the subject was not in a particular area.)

According to Mattson, it's best to perform this exercise privately, "because it will ensure that even meeker individuals will be able to express their opinion without being intimidated by the more vocal members of the group." (See: Search & Rescue and The Wisdom of Crowds)

With Dan O'Connor's method, the letters A through I are used for each search segment instead of percentages, and then a numeric value is assigned to each letter. This is what our SAR Coordinator was doing when he was entering all of our results into his CASIE computer program, resulting in a plan to first search the segments with the highest probability of area (POA) as suggested by our group's consensus. The computer figures out the segment percentages, rather than the members of the group having to do so.

The following explanation of the numeric values assigned to each letter is quoted from the "CASIE Help: Planning" section of the math.arizona.edu website:

Each letter that the expert has used is assigned a numerical value according to the scheme:

For our team's search, the resulting average percentage for the ROW was 54%, with segments 2, 3 and 9 having the highest POA. I don't yet have an answer as to the accuracy of this exercise in this particular search, because it is still ongoing, but one example of a real-life mission that used the Mattson Consensus is that involving Ranger Randy Morgenson, who went missing while on a solo backcountry patrol in the Sequoia and Kings Canyon National Park, California. While searchers did fail to find Ranger Morgenson's body during the mission period (eventually determined to be due to the high amount of runoff that summer), he was ultimately found 5 years later "within an area of high probability of discovery in the original search." Read the story here.
Posted by Deb Kingsbury at 4:15 PM 5 comments:

An article was recently posted to one of the Search & Rescue discussion groups I belong to, about the Idaho Mountain Search & Rescue Team, an independent group not affiliated with a law enforcement agency. Formed half a century ago, the team of volunteers is now 60 members strong, including a 10-member technical team and a four person/dog K-9 unit made up of two German Shepherds, a Golden Retriever and one Giant Schnauzer named Watson. This year, "IMSARU" is adding a mountain bike team and mobile command center, which is being built in a utility trailer constructed by team members.

The team has a great newsletter on their website, including stories and photos from actual missions and training sessions. Check out their January/February 2009 issue in which they describe the search for two missing boys, 14 and 15 years of age, who'd gone looking for a steeper hill to sled without telling their parents and then, cold and wet from crossing a creek, got stuck. Read about what happened when their fathers went looking for them on their own and the batteries in their borrowed flashlights died along the way.
Posted by Deb Kingsbury at 11:03 PM No comments: