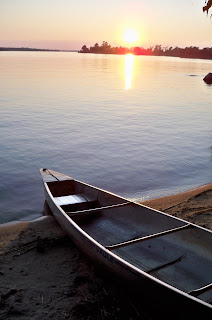 Here I am--back from my trip to the Boundary Waters in northern Minnesota, where my husband and I paddled, camped and hiked for the past couple of weeks. While we were there, I had lots of time to read while hiding from mosquitoes in our tent, so I picked up some regional books, including one related to Search & Rescue.

It's crossed my mind a number of times--how easy it would be to get lost in the thick North Woods, often without significant landmarks to aid in navigation, especially if one ventures off the beaten path (not that there are many beaten paths in the Boundary Waters that aren't popular portages) without maps and a compass and solid orienteering skills. In fact, a friend of mine and I got quite confused about our location and our route ahead when we hiked Minnesota's Kekekabic Trail in 2003 and, at one point, backtracked close to ten miles just to get to a point we were sure of.

Part of what made it so confusing--and still does today--is the mess created by a powerful microburst, with straight-line winds up to 100 miles per hour, that swept though the area on July 4, 1999. The storm left trees piled up like huge matchsticks, sometimes 20 feet high over an area of 386,000 acres in the wilderness alone, affecting 800 campsites, 80 miles of portages, and over 130 miles of hiking trails. (Here's an article with photos about some of subsequent clean-up efforts: Sacramento Hotshots Help With Search & Rescue in Minnesota's Boundary Waters Canoe Area Wilderness) Sixty people were injured during the mid-day storm, with 20 being evacuated by floatplane. A decade later, the effects of that storm are still seen and experienced firsthand if you hike or portage canoes in the area. 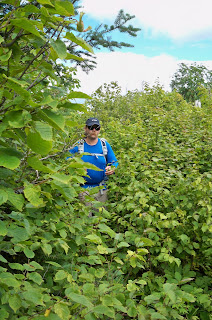 Add to that the fact that hiking trails in the wilderness are not marked and, so it seems, rarely maintained. Just to show you how thick it is up there, check out this photo of my husband. He's actually ON the Border Route Trail in the Boundary Waters. At times, it's more like swimming through brush than hiking. We had to pause and hunt for the trail on several occasions and do some crawling under and climbing over a number of downed trees. So I could relate to Lost in the Wild: Danger and Survival in the North Woods

and how one wrong move or a short lapse in attention can get you into very deep trouble up there.

This book tells the stories of two young men, one an experienced guide and the other a novice backpacker, unfamiliar with the area, who got lost in the North Woods at different times, and the decisions and events that led to their life-threatening predicaments as well as their rescues. One of the SAR operations takes place on the U.S. side, the other is across the water-based border in Canada. Despite the fact that the reader knows both men ultimately survive, that didn't detract from the suspense. And the book is well-written and moves along at a good pace. 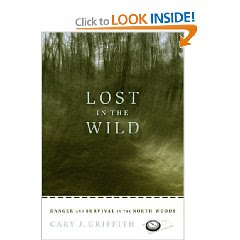 I was particularly interested in how the SAR units operated and how they handled the searches. The teams involved were Minnesota's volunteer Lake County Rescue Squad and, in the search on the Canadian side in the Quetico Provincial Park, the Ontario Provincial Police Emergency Response Team.

"Since its inception over three decades ago, Lake County's volunteer search and rescue has grown progressively more sophisticated. In the late 1950s and 1960s, it was little more than a group of concerned citizens. Today, the fifty-plus volunteers are divided into three squads: Two Harbors, Silver Bay and Finland. Each squad has trained individuals who can stand in as incident commanders, the leaders responsible for guiding and directing searches. And now the volunteer group has plenty of the right equipment: ATVs; personal watercraft, and boats; gear for water searches, woods searches, climbing rescue; radio equipment; even their own command vehicles. The Finland squad's vehicle is a used ambulance and trailer, gutted and refurbished with communications gear, a table and sleeping berth."

"The helicopter is almost in from Sudbury, but they realize there is no good place for it to land. The area around no name lake is so thick with brush--trees running straight up to the edge of the water with no flat granite outcrops--they will need to create some kind of makeshift helipad.

Sergeant Norm Mitchell and Moore know the copter doesn't need much. But it should be plenty open, so the rotors have no chance of hooking on a tree branch. The most open place close to camp is the cobblestone end of the lake, but the boulders are too large and tumbled, in the same state the glaciers left them. Its surface it too uneven.

A kind of log-dock landing pad could work."

And that's what they built in time for the helicopter to touch down a half hour later and pick up the spotter from the wilderness base camp they'd set up.

. As in "Lost in the Wild," Griffith weaves together two separate incidents, "showing the dangers experienced by both groups--one highly prepared and experienced and the other tragically ill equipped." (Amazon.com)
Posted by Deb Kingsbury at 2:09 PM No comments: