Decisions For Heroes is a statistics collation software, helping Search & Rescue teams record and analyze their rescue operations and training. There is nothing to download, however; users access the tool as a web application. Teams enter incident and training exercise reports into this online program, and it will then tell the team how to improve their responses. The software tracks team member qualifications, equipment, and training, and the use of these things against incidents.

Users sign in after each incident or training exercise to enter their activity report. The software will then automatically add the data to the team's records and update their stats. Rescue teams pay a monthly or annual subscription to gain access to the service. The program was trialed for 8 months with 1,800 rescuers in 5 countries.

One team that uses the Decisions For Heroes program is Inland NW Search and Rescue. INSAR is a multi-disciplined search and rescue organization located in the Pacific northwest and based in Spokane, Washington. They provide ground, high angle, mountain, and water search and rescue support to the region, with twenty-six field-ready team members and fourteen individuals currently in training.

Part of their requirement to become field ready is to comply the Washington State Administrative Code (WAC 118.04.120) as it relates to search and rescue volunteers. INSAR has utilized the WAC guidelines to formulate a comprehensive set of requirements that their team members must complete and maintain in order to receive field ready status.

Joe Coates, the INSAR Training Officer, stated, “One of our greatest challenges was disseminating  information to our team members regarding training record status and notification of upcoming activities, as well as enhancing overall communication within our organization. Over the last year, we reviewed numerous database programs and internal web based solutions. We were not able to find one that completely fulfilled our requirements."

Until they found Decisions For Heroes, that is. Coates goes on to say, "Early in 2010, we discovered a corporation based in Ireland named Decisions for Heroes. They are a group of search and rescue professionals who developed an easy-to-implement but comprehensive, web-based solution. This has provided the leadership and team members within the INSAR organization with resources beyond our expectation. The database tracking of an individual’s qualifications, team calendar with auto notification of events, internal communication via e-mail, chat, and whiteboard along with extensive report generation and analysis has provided us with tools that will allow our organization to position itself for the future. Decisions for Heroes has been extremely responsive to questions as they have arisen and are very open to suggestions for future enhancement to their search and rescue solution.”

Information and a video regarding Decision for Heroes may be found at DecisionsForHeroes.com.
Posted by Deb Kingsbury at 3:17 PM No comments:

This information was posted on the SAR-L email list and, with permission, I'm sharing it here in order to help spread the word:

During a massive search in the San Diego area, a man named Stephen Watts, a.k.a Steph (pronounced "Steff"), presented himself to the Sheriff's Department and coordinating agencies as a member of 1st Special Response Group (1SRG), a known and reputable organization, in an attempt to insinuate himself into law enforcement search efforts. Soon after, Mr. Watts began blogging about his actions, including sensitive search information.

1SRG has never had a member, past or present, by this name or any reasonable variation, nor have they ever received and/or denied an application by such a person.

1SRG launched an investigation and determined that Stephen Watts is a freelance "investigative" reporter who provides titillating and "newsworthy" information to on-air broadcasts such as Nancy Grace, Greta Von Susteren, CourTV (now HLN), and other entertainment providers.

1SRG is sharing this information because Mr. Watts appears to have repeatedly joined with Texas Equusearch in their efforts and has made a number of other attempts prior to his actions in San Diego to insert himself into other search missions. He falsely stated that he was with 1SRG in an effort to further his own cause. Apparently, he has done this before, and 1SRG is concerned that he may try to do so again in the future.

From information obtained during the investigation, Mr. Watts arrived in San Diego, along with Tim Miller and Texas Equusearch, in the search for the McStay family. You can read the McStay relatives' account of  their experience with Mr. Watts at http://www.mcstayfamily.com/steph-watts-rumors.

While in San Diego with Texas Equusearch, Chelsea King disappeared, and Mr. Watts used that opportunity to get involved with a growing national news story.

After verifying their initial information with several agencies and individuals, 1SRG notified both the San Diego County Sheriff's Department and the California Emergency Management Agency, the local SAR coordinator, state SAR coordinator, and, since this was an investigative effort that included federal agencies, contacts within the FBI. Based on further discussion, this issue is said to have been "handled and considered resolved."

1SRG also attempted to contact Mr. Watts through his personal webpage, his Facebook page, a phone number he gives on his website, and through email, in addition to their posts on the SAR-L lister and elsewhere. Mr. Watts has not returned their contacts.

On March 12th, formal "cease and desist" letters were sent to Mr. Watts, CourtTV/HLN, Nancy Grace, Greta Von Susteren, and those agencies who employ Mr. Watts for their "news" services, instructing them that any attempt to use 1SRG's name, logo, reputation, or other team affiliation would be met with legal action and that 1SRG would assist other SAR teams who may find themselves in a similar position.

This information is being provided in the attempt to stop Mr. Watts from breaching law enforcement and search mission security as he seeks confidential or legally protected information, as well as to protect both 1SRG and other SAR teams from those same efforts.
Posted by Deb Kingsbury at 6:22 AM 3 comments:

A SAR-Related Adventure In Nepal (And A Book To Follow) 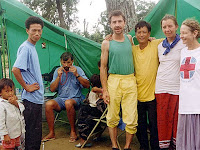 So, I'm not sure how many of you who read this blog also follow Deb's Search & Rescue Stories (or any of my other online ramblings), but JUST in case you don't, I wanted to let you know about my upcoming trip to Nepal, where I'll be hanging out with the country's only SAR team for three months beginning in May, 2010. (And if you've heard about this umpteen times already, I apologize.)

Anyhow, last November, the founder of the Himalaya Rescue Dog Squad Nepal, Dutchman Ingo Schnabel, contacted me to see if I'd be interested in writing a book about them. This would mean traveling halfway round the world, of course ... which took a few minutes of consideration on my part. Twenty years ago this past October, Ingo followed through on his dream of starting a SAR team in Nepal. Ingo explains how this came about in a post on Nepal Friends in Times of Need. He wrote:

"I was sitting in Maastricht in the Netherlands in front of the Television, a beer in one hand and potato chips in the other. I was just 41 years old and had traveled half the world. I was a researcher in Africa, a dog trainer (Imperial Iranian Air Force) and Biology teacher in Tehran, then called the Empire of Iran, where Shah-Han-Shah Reza Pahlevi , the powerful Emperor, crumbled at that time and I had to leave.

"Back in the Netherlands, I tried my best to settle down, and I got fat and lazy. Then suddenly, in front of that TV, I saw a program about the misery after the earthquake in Darjeeling and Dharan in 1988. I remembered that I had promised to my Tibetan friend Lobsang that I would come to India and Nepal and start a dog breeding center for earthquake relief. I jumped up, switched off the TV and selected six dogs from different local breeding centers and started fund raising and their training in Maastricht at the motorcycle road race trajectory in the forest. A year later, on October 8, 1989, I arrived with these dogs in Nepal and have never left the country since."

During those 20 years in Nepal, Ingo and the team have started hospital camps in remote areas of the country and even a special school that doesn't adhere to Nepal's caste system. (See the video below.) They respond to natural disasters, such as earthquakes, landslides and flashfloods, mass casualty and medical situations, and to reports of missing and injured trekkers. The more I learn about Ingo and the HRDSN, the more fascinated and excited I become about the trip. I only hope I can do their story justice. I'll write the book when I return to Arizona.

Here's that video about the school Ingo started....


To read more about my upcoming trip and perhaps consider a pledge towards the project in exchange for a signed copy of the book (once published) and other backer rewards, visit my Kickstarter page. There, you can also read a number of project updates and HRDSN member introductions.

While I'm in Nepal, I won't be able to keep up on this blog (so if anyone is interested in guest posts, let me know!), but I will be blogging about the experience and the exploits of the HRDSN on Deb's Search & Rescue Stories and posting updates on my project's Facebook fan page.

Related article:
My Adventure in Nepal
Posted by Deb Kingsbury at 7:54 AM No comments: