In the News: Video of Failed Rescue Prompts Investigation

If you follow current events in the realm of Search & Rescue, you may have already heard about the unsuccessful attempt to rescue an Argentine climbing guide from 22,841-foot Aconcagua peak during a blinding snowstorm. Footage of the rescue mission--about three minutes of it--was aired on Argentinian national television and is now circulating on the internet, prompting an investigation by prosecutors. Family of the victim are claiming that the six-member rescue crew allowed the man to die.

Here are several links regarding this story that you may find interesting:

Read a discussion and opinions about this incident on Backpacker.com's forum.

And here's a very informative blog post by SAR volunteer Brian Smith on Team140.com
Posted by Deb Kingsbury at 8:59 AM No comments:

Book Review: Heart of the Storm 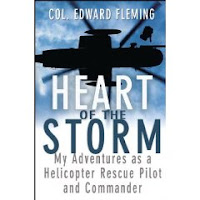 I've been on a helicopter rescue reading binge lately. In fact, I've always been fascinated by those flying machines, though I never realized just how difficult they are to fly, even in ideal conditions, until reading Heart of the Storm: My Adventures as a Helicopter Rescue Pilot and Commander

by Colonel Edward Fleming. Needless to say, most of the author's missions were in anything but ideal conditions.

During his 30-year career, the author participated in and led countless rescue operations, including the 1991 Halloween mission detailed in the book The Perfect Storm

and movie of the same name. He also orchestrated the successful rescue of Dr. Jerri Nielsen from Antarctica. Remember that one? She was the woman diagnosed with breast cancer, whose health was rapidly deteriorating during the long Antarctic winter, necessitating a ground-breaking, daring mission to save her life.

"Heart of the Storm" also recounts dramatic jungle rescues, the longest helicopter rescue mission in history to save crew members of a Ukrainian freighter 840 miles off the coast of Nova Scotia, desert operations in Iraq, and a nearly disastrous rescue of crew from a sinking schooner during an Atlantic winter storm.

I found this to be a well-written firsthand account and enjoyed the time I spent "flying" with Colonel Fleming.

Also, if you're interested in helicoputer rescue videos, there are a number of them on our website. Browse through our videos starting here.
Posted by Deb Kingsbury at 8:43 AM No comments:

After completing an assignment during a recent Search & Rescue mission, with the subject still missing, I was asked to fill out a report and assess Probability of Detection (or "POD") given certain perameters. Simple logic told me what POD basically meant--the likelihood that the search of an area using a certain technique would locate the object of that search--but how to assign actual percentages to what my four-person team had just carried out was another matter. As a first-time field team leader, I looked at one of my more experienced teammates standing next to me.

Thirty percent! But we'd been very thorough and had carried out our assignment to the best of our abilities. It wasn't like we'd been out bird-watching instead of searching for the missing man. And it was a bright, sunny day, too. No wind to speak of. No ongoing, loud noise. Tree cover relatively sparse in our area. We'd moved slowly and deliberately, looking carefully for potential clues as we went along.

Reluctantly, though, I wrote down 30% and the even lower percentage my teammate stated for an unresponsive subject. I went along with his superior knowledge but felt like I was giving a bad impression of our team's efforts that day. Would those in charge of the search think we hadn't tried hard enough or done what they'd asked of us?

What I didn't understand at the time, however--among other things--is that POD isn't a measure of a team's efforts or their skills. I've also learned that probabilities higher than 80% are usually dropped to 80%, perhaps for legal reasons. Still, had I known these things at the time of the search, 30% would have felt too low for a responsive subject, because there were yet other factors I was unaware of.

Basically, when asked to formulate POD, there are two main categories to consider--the responsive (or conscious, willing and able) subject and the unresponsive subject. Given the terrain, weather, number of searchers, rate of travel, density of the flora, and a host of other conditions, the field leader asked to determine POD must use his or her gut instinct, not to mention some wishful thinking, to make an estimate. And this is not an exact science, particularly when this guesstimate is asked of a human being as opposed to a computer model. I felt a bit better after the mission knowing this and realizing that the more experience I get in the field and the more practice I have at estimating POD, the more comfortable I'll get with the practice.

But rather than paraphrase any more of what I think is a very good, easily understood article on POD, I'll simply suggest that you take a look at "PROBABILITY OF DETECTION (POD) - PART 1" and "PROBABILITY OF DETECTION (POD) - PART 2" by John Mindock of the Cibola Search and Rescue Team, based in Alburquerque, NM. These and other articles were published in the team's Lost... and Found newsletter.

Posted by Deb Kingsbury at 1:12 PM No comments: