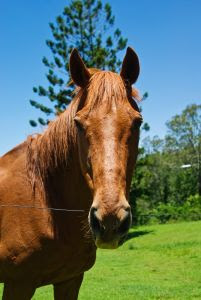 Search dogs, sure. But horses? I'd always thought mounted SAR just meant searchers riding horses while the riders did the searching. That is, until I heard a couple of my teammates talking about how air-scenting horses are being used in Search & Rescue.

So I did a little reading and realized that air-scenting is a horse's specialty, and dogs and horses compliment one another very well in the field. While dogs are able to access nooks and crannies horses may not be able to reach, horses can use their long necks and big noses to catch each bit of high-flying, elusive scent. In addition, horses can search a large area in a short amount of time.

Perhaps the person with the most expertise in the realm of equine search is Terry Nowacki of Minnesota, who runs courses showing how horses can be trained to follow their noses and, in 2001, wrote the first manual on air-scenting with horses. Nowacki says riders generally take more training than do their horses, the latter often learning quickly through reward-based training.

Air-scenting is best suited to terrain dominated by low brush or long grass. Under ideal conditions such as these, horses have been known to detect scents from up to a quarter-mile away. But horses typically manage to pick up scent from up to 200 feet, a range sufficient to find someone lying in tall grass or off to the side of a trail.

Nowacki says the technique with horses doesn't work like it does with tracking dogs, where a piece of clothing worn by a subject might be introduced for the dog to acquire a scent to follow. What horses are following is a general human scent, not that of a particular person. And if a horse finds the wrong person, such as another searcher, the rider should simply reward the horse and continue on as one would with an air-scenting canine.

To prove the effectiveness of air-scenting horses, Terry Nowacki has performed a number of demonstrations, including one at an "Equine Sign Language and Scent Detection Clinic" at Tumbleweed Stables in Nebraska with the help of Ponderosa SAR, a team that uses both dogs and horses in the field. For this mock search, Ponderosa SAR used four K-9's and two mounted searchers. The dogs and horses were trained, tested and certified in scent detection for Search & Rescue.

Nowacki set up a scenario without the search team's knowledge, placing a person in one hiding spot and a shirt in another. The hidden shirt had been worn the night before by one of the non-SAR clinic participants. Nowacki then found a high vantage point for himself and the remainder of the group, from which they were able to observe about 60% of the search teams' movements. The search area was made up of 75 acres of rolling hills and grassland, intertwined with ravines.

During the demonstration, after the team had searched about 30 acres, one of the mounted handlers called in to the observer group by radio and stated that her horse was using equine sign language, giving a cue that he'd picked up on human scent. The observers then watched as the horse was "given his head" and set off directly into the wind, over a hill, and found the hidden subject. As the rider later reported--and the observers witnessed--the distance from where she first detected the horse's signal to the hiding subject was about 500 feet.

The search continued, and, after they'd covered 65 acres or so of the search area, the rider again reported that her horse had given another cue. And once again, observers watched as horse and rider headed into the wind a distance of about 200 feet and found the well-hidden shirt in a ravine.

In another demonstration, this one involving cadaver scent, Terry Nowacki's horses were blindfolded to prevent observers from saying the horses were searching by sight. During the first part of the search, he rode a 12-year-old horse. When the horse picked up the first trace of cadaver scent, which he confirmed by his silent alert signals, Terry marked the spot with a flag, then continued on until the horse showed a stronger silent alert signal.

At this point, in order to prove that the horse was working totally on its own, Nowacki dismounted and turned the horse free in an open field to locate the cadaver source. After losing and relocating the scent, the still-blindfolded horse searched out the hidden cadaver material from a distance of 50 feet. The horse located the source of the cadaver scent within the 30-minute time frame allowed by the NASAR standards used for this test. A yearling miniature horse was also successfully tested according to K-9 cadaver standards.

In order to make the test more difficult, some road kill was also placed in the test area, but this didn't fool the human cadaver-trained horses. One horse ignored the scent, while the other gave just one signal that something was up-wind but did not try to follow the scent.

And here's an article by Jorene Downs, a nationally recognized instructor and consultant on effective use of the mounted SAR resource: "Mounted SAR: Equine Clue Dectection"
Posted by Deb Kingsbury at 11:16 PM

I've found that, reduced to reality, horse teams have refused to search in poor weather or at night, gotten lost and been unable to give their own position (certainly not the fault of the horses...) and been stopped in their tracks by a fallen tree on a fire road, unable to complete their assignment. I don't have any reason to doubt that the horses can sniff out a non-scent-specific human source, but I have yet to be convinced that they're any more appropriate than a canoe for a typical urban/wilderness-interface search.

also... illusive -> elusive, unless the scent particles aren't really there.

Ah, you are so right! Thanks for pointing that out. Fixin' it! Gotta keep me on my toes.