SAR Applications of the "Human Backpack"? 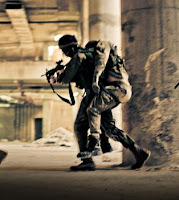 I recently received an email from a company called Agilite Gear about their "Human Backpack," asking me what I thought about its potential as a evac option for Search & Rescue teams in the U.S.  Agilite rep, Ryan, tells me that the product is "in use by lots of mountain search and rescue units rescuing injured outdoorsmen." He explains, "It's something that we designed originally for Israeli Special Forces and which we now supply to SF worldwide, the US Marines, the US Army and civilian search and rescue units"

This is the news release about the product, including a video demonstration. So, what do you think? Would this be a viable alternative for SAR?


The IPC (Injured Personnel Carrier) came about when soldiers from one of the Israel Defense Forces' elite units found that by connecting four rifle slings together they could carry injured soldiers like a backpack, instead of the traditional fireman's carry. Agilite turned the concept into a product, incorporated built-in padding and several other features and now it's a more efficient alternative to the fireman's carry that keeps both hands free and is significantly more comfortable for both the carrier and evacuee.

While the product has only existed for a few months, it is already in use with Special Forces and elite law Enforcement units worldwide including recent acquisitions by The Marine Corps Special Operations Command (MARSOC) and Australian Armed Forces.

"Anyone who's ever carried or been carried in a fireman's carry knows it's incredibly uncomfortable and inefficient," said Lt. Col.(Ret) Dr Eric Setton, former Head of Medevac for 669, The Israeli Air Force's elite search & rescue unit. "The IPC gives you full maneuverability, keeping the injured person securely on your back and gives you full use of both your arms and legs." Whether you're a soldier carrying a wounded operator out of a firefight or a rescue professional carrying an injured hiker up a steep hillside, the IPC is a must-have item."

This is North Shore Rescue (NSR) in Vancouver using that product to rescue an injured hiker with a broken foot:http://www.youtube.com/watch?v=iRHS2TxqtZ8&list=UUxLjcXTuuoZlDwjH_JouzjA&index=5

Seems like it would be useful only in limited situations. I would not use it if I couldn't clear spine, for instance. And I do question the safety of a single person carrying that weight on steep terrain, as shown in the video in the comment above. But it's so small and light it may be worth having for the few times it turns out to be the perfect tool.